The miter saw is the most used tool when building a tiny house. Almost every single piece of wood, except for the sheathing, will be cut by this saw before going into your tiny house. Miter saws can have many different options and range significantly in price.

We tested 4 different saws and the best miter saw was the DEWALT DW716XPS Compound Miter Saw. This is a 12-inch saw with enough power and reach to cut through almost everything we threw at it, and the build quality is outstanding. This saw includes an LED guide system instead of a laser that had mixed reviews from our testers. Overall most of us liked it, but unlike a laser, it doesn’t show you accurately where the blade will cut until the arm has been lowered to where the blade is very close to the lumber (by casting a shadow of the blade onto the lumber). On the positive side, it doesn’t require any adjustment and it also lights up the work area nicely.

Another thing we liked about this saw was that the vertical angle could be adjusted in either direction, to the left or to the right. On some of the cheaper saws this can only be changed in one direction and may thus require you to rotate your lumber before making a cut. This isn’t a deal breaker, but can be a real annoyance when working with material like the siding that requires a lot of angled cuts.

This saw does not have the slide mechanism that some of the others have. While the slide gives you a little more reach so that you can cut lumber that is wider, it also adds a lot to the price, adds quite a bit of weight to the saw, and makes the saw less accurate. Considering the benefit of the added reach is not needed often, we preferred saws without the slide.

The only thing about this saw that we weren’t as crazy about was the price. Our second place pick, the Hitachi C12FDH 15 Amp 12-Inch Dual Bevel Miter Saw with Laser, is a great saw with many of the same features as the DeWalt but for about $125 less. We just didn’t like the fence or the angle adjustment mechanism as much. But if you are on a tighter budget you will surely be happy with this saw as well. 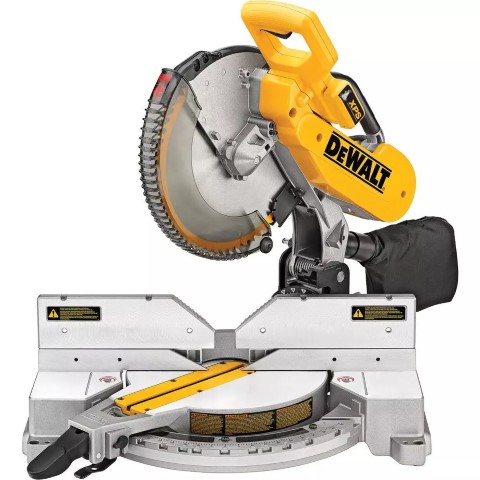 Buy on Amazon
$361.73 at the time of publishing
Return to Tool Index
comments powered by Disqus